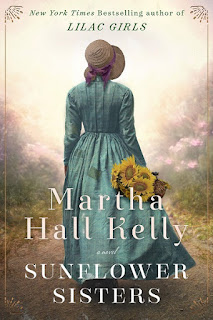 This is a tale of slaves during the Civil War.  You learn about how they were treated and what their limitations were.  It's a fictional account but it shows you the facts.  Being a slave was not pleasant.

Ballantine Books and Net Galley let me read this book for review (thank you).  It will be published on March 30th.

Georgeanna Woolsey, a Union nurse during the Civil War,  Jemma, a young enslaved girl who is sold off and conscripted into the army, and Anne-May Wilson, a Southern plantation mistress are the main characters.

You see how the war changes things.  Not everyone has enough to eat, many are whipped or hung, and love is a hard thing because slaves are sold and they may never see their spouse again.

One of the owners is a spy.  One has relationships with the female slaves.  None of them are very kind.  I hate reading about things like this but it's a fact things like that happened.

Georgey is determined to open a nursing school for women.  She has learned how to nurse but the male nurses take her jobs away from her.  Jemma is a young slave living with her mother and father and other siblings.  But they hang her father and her mother runs.  Soon Jemma is sold to the Union Army.  Anne-May is the owner of Jemma and she comes after her when she gets separated from the army.

There's a lot of trauma in this story.  This is not a time to be proud of but it is a good look at what history can teach you...