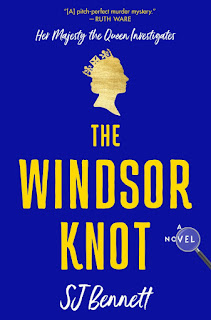 Queen Elizabeth is getting ready for her 90th birthday party.  Then she learns of a death of one of her guests.  She lets the men do their investigation but she doesn't agree with their solution...

William Morrow and Edelweiss let me read this book for review (thank you).  It will be published on March 9th.

The Queen knows it was murder, not suicide.  So she sends her servants who are close to her to check things out.

At first, it is thought that Russians did it (he was a Russian pianist).  But that is not the answer.  The fact that someone in the castle did it bothers everyone.

Not everybody is what they seem.  The Queen uses her assistant private secretary to investigate and after she has gathered all the facts, Rozie knows the answer is there but she can't see it.  Then she has a dream and everything falls into place.

Rozie comes close to dying when she's facing a gun, but she has learned how to defend herself and she does a good job on the killer.

The Queen is an interesting character.  Her mannerisms and actions mimic the real Queen.

This was a interesting read.  With so many staying at the castle, there are plenty of suspects.  It takes a while to weed them out.