A Pig in the Palace by Ali Bahrampour 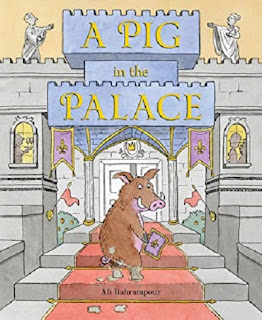 He's home rolling in the mud when the postman shoves an envelope under the door.  What could that be?

Abrams Young Readers sent me a copy of this book to read for review (thank you).  It has been published and you van get a copy now.

It's an invite to eat with the queen.  He has fleas and isn't all cleaned up but he goes to bed with the intention of doing it in the morning.  He only awakens when the car arrives to take him to the palace.  Oh well...

This reminds me a bit of our family dinners we had when I was a kid.  We'd have thirty-three people at the table.

When he gets to the palace he finds he's the only one who doesn't have clothes.  He tries to take a small tablecloth but he dumps the flowers and makes a mess.  The longer he's there, the bigger the messes are.  They are trying to throw him out when the queen arrives.  You won't believe her response!

Email ThisBlogThis!Share to TwitterShare to FacebookShare to Pinterest
Labels: A Pig in the Palace, Ali Bahrampour, Book Faerie, book review