Feathered Serpent and the Five Suns: A Mesoamerican Creation Myth by Duncan Tonatiuh 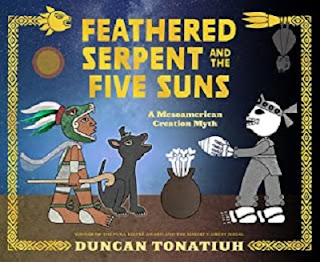 The gods of Mesoamerica attempted to create humans.  Instead they created some animals.  So they threw the bones to their version of the devil...

Abrams Books for Young Readers sent me a copy of this book to read for review (thank you).  It has been published and you can get a copy now.

Only one god did not give up.  He was the Feathered Serpent.  He went after the bones.  He had to go through tests to get there.  It was good that he had Xolotl from the first challenge with him.

When he gets there he asks for the bones.  The other evil god does not want to give them so he grabs them and runs.  The evil god sends bats after him and he and the bones fall in a deep hole.

Will he be able to get out of the hole?  Did the bones get broken?  Read it and see.