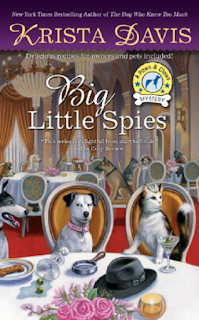 The judge's dog is missing and everyone is searching for it.  Holly finds the pet detective in someone's backyard.   He's dead.

Berkley and Net Galley gave me the opportunity to read this book for review (thank you).  It will be published on March 30th.

There is a group of ladies in town that is called Wagtail Animal Guardians or WAG.  They have cats or dogs and enjoy get togethers with both the people and the animals eating.

The police initially consider Holly as a suspect because she found him.  So Holly launches her own investigation.  She thinks it's someone in the group because the victim died in the back yard of one of them.

It's amusing because the judge, who is a widower, is being pursued by three women.

Holly looks at all of them with new eyes looking for clues.  She's wrong most of the time but she finally thinks she has it right.  The trouble is that the killer knows what she works out, so she's on the list for removal next...