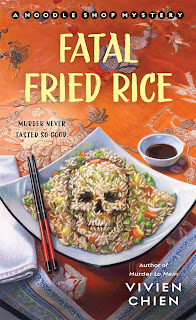 Lana is tired of her sister giving her a bad time about not being able to cook Chinese food.  She decides to take a class and learn how.  Then she forgets her ingredient list and heads back to the classroom to get it.  She gets a big surprise when she looks in and sees the teacher dead with a knife in her back.

St. Martin's Paperbacks and Edelweiss let me read this book for review (thank you).  It will be published on March 9th.

The detective thinks she killed her with the help of the janitor.  That doesn't leave her much choice.  She's going to have to run her own investigation.  Her boyfriend is a cop in another town and he tries to talk her out of it, but it doesn't work.

She checks out the janitor and the students that knew the teacher and then she gets a clue from one of the suspects.  Pictures that show a teacher flirting in the hall and the victim watching him.  She checks him out.

Then she sees more pictures of her looking at the original photos.  Someone is stalking her.

Then she starts looking at the women.

She figures out who killed the victim but she's in a car with the person who just happens to have a knife.  Can she save herself?