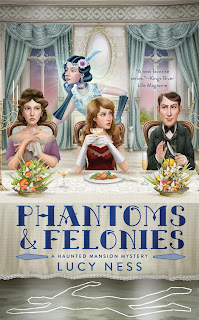 Avery is excited that the theatrical group is going to do a play at the club she runs.  There are a lot of details to work out and they are in the midst of getting everything ready when they find one of the actors dead...

Berkley and Edelweiss gave me the opportunity to read this book for review (thank you).  It will be published March 30th.

Avery's boyfriend is a cop and he takes her Aunt to the station because she was found standing over the victim with the knife in her hand.  She said she found him dead and she didn't even think of taking the knife out.

Then another woman says she did it.  They took them both to the police station.  It doesn't last long though.  They are both left handed and he was stabbed by a right handed person.

There are more questions for everybody but no one person stands out.  They have a seance and get a visit from the victim's ghost.  He speaks but he doesn't identify the killer.

Then Avery was talking to some of them and realizes what the significance of what the ghost said.  She leaves and calls her boyfriend but the call go to voicemail.  Then she finds someone is trying suffocate her with a plastic bag.  She has two coming after her, will help show up in time?