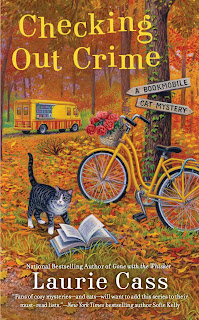 Minnie drove the bookmobile with her cat, Eddie.  She's traveling back roads and almost gets run over by a car driving too fast and partly in her lane.  She manages to avoid the car but then she sees something worse.  There's a man lying in the road and she doesn't know if she can stop soon enough.  She managed to stop but she was close to him.  She tries to help him but it's too late for that...

Berkley and Edelweiss let me read this book for review (thank you).  It will be published March 30th.

She wonders if the car going so fast held the killer.  She couldn't see the driver.  The police can't do much with no description to focus on.

Then they find a dead woman.  The man had been hit in the head, the woman was strangled.  Minnie starts asking questions and looking for a reason why they died.  It's a small town, she can't believe the people she knows would commit murder, but someone had.

She gets her friends involved and they all attempt to help crack the case.  She finally figured it out but while she's explaining to someone, a bullet takes out the water bottle in her hand.  Will she be victim #3?