The Night Hawks by Elly Griffiths 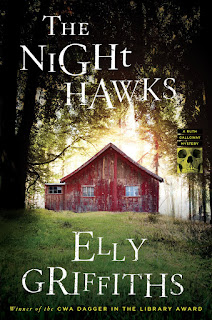 Ruth is an archaeologist and while there is an excavation going on at the beach where some Bronze age artifacts are found, they also locate a murdered man.  He's no artifact, he's a current member of the community.

Houghton Mifflin Harcourt and Edelweiss let me read this book for review (thank you).  It will be published June 29th.

If that murder is not enough, there is a farm where a man and his wife are dead.  It looks like he shot her and then himself.  There is a small problem, though.  His right hand fingerprints are on the gun and he's left handed...

The group of people they are investigating is a mess.  One man has a wife and a mistress.  The daughter of the couple had an affair with a teacher she met at school.

The Night Hawks search at night for treasures.  Then they find one of them dead.

As the search continues more secrets come to light and there are no end of suspects.  Ruth helps with the case but it's complicated by affairs and the number of players.

Will they ever find out what happened?