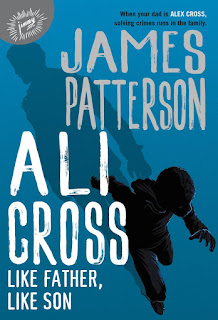 Ali is looking for the girl he likes.  He has his friends with him  and they are at a concert that Zoe's mother is going to put on.  Then he hears a gunshot from the direction she went in...

Hatchet Book Group and Edelweiss gave me the opportunity to read this book for review (thank you).  It will be published on June 28th.

He lays on the ground and looks for Zoe under the buses parked there.  He sees her and someone else's shoes.  The other person leaves, and Zoe has been shot in the wrist.  She won't tell him who shot her.

Her mother is divorced and her sister lives with them.  Her father is homeless, but he works two jobs.

As Ali attempts to find out what happened, he finds more and more connections to Zoe.  Ali's father tells him to be careful.  He wants his son safe.

Things begin to fall into place.  Ali is not a bad detective but he's learning that following clues can be dangerous...

Another good read from Mr. Patterson.