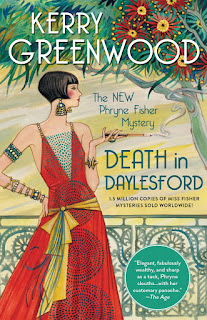 Phryne gets a letter from a Herbert Spencer asking her to come to his place of business.  He runs a home for soldiers that are shell shocked.  He doesn't say why but Phryne's curiosity makes her go.

Poisoned Pen Press and Edelweiss allowed me to read this book for review (thank you).  It will be published June 1st.

Phryne and Dot go thinking of it as a holiday.  It's no holiday.  There are missing women and murder is done right under their noses!

Phryne decides to try to figure who the killer is.  One cop warns her off, the other asks for her help.  There are booby traps, more murder and it gets dangerous to be snooping about.  That doesn't stop Phryne.

She finds nothing obvious and isn't sure who the killer could be.  After lots of fact finding and some meditation on the matter, she thinks she has it...