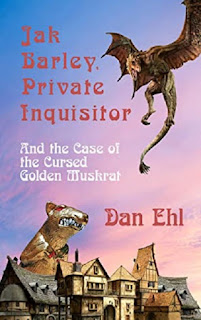 This is a fantasy tale that is written by a man with lots of imagination.  There are all kinds of enemies in Jak's world but that doesn't make him give up on his quest.

The author sent me a copy of this book to read for review (thank you).  It has been published, so you can get a copy now.  There are several books in this series and they are all fun to read.

He is on a job to find the heir to the throne that went missing as an infant.  When you don't know what he looks like for sure and he hasn't been taught to act like royalty, how is he supposed to find him?  He goes looking anyway.

Another person has hired him to get back the shipment that was stolen.  There was something in the box besides the goods but the owner doesn't know what it was.  However, those looking for it think he does...

Jak has to fight Ghennison Viper Mages and try hard to stay alive.  He's got a huge automation that looks golden who is on the hunt for the wand that's missing.  He needs to find it first...

Jak has his girlfriend, his half brother and Lorenzo with him but it takes a lot of work to be safe.  His girlfriend is a witch, so that's handy.

The book is full of action, danger, and unexpected consequences.  Trust me, you won't be bored.