Don't Lose Your Head: Life Lessons from the Six Ex-wives if Henry VIII by Harriet Marsden 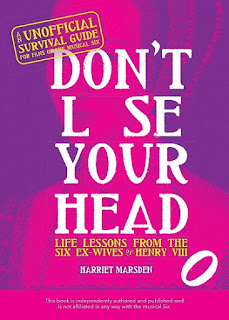 Henry VIII might have been King but he was not a nice man...

Ulysses Press sent me a copy of this book to read and review (thank you).  It has been published and you can get a copy now.

You learn about Henry's wives (he had six) and each has a chapter devoted to her.

Each wife tells you how they were brought up, why they married him and how long their marriage lasted.  He enjoyed having women in his bed, but it didn't take long before he got bored.  His staff helped him find excuses to get rid of them.  Some got beheaded, some died from childbirth, some were sent away.  As he got older, the women he married were younger.  Most were looking for security.

Some of these I knew about but there were more I didn't.  Reading their stories lets you walk in their shoes.  This was a fascinating read based on facts.

You won't be bored!