The Bike Thief: The Adventures of Jack Cannon Kid Detective by Brett Ermilio 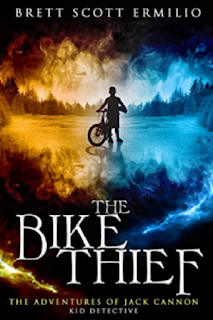 Jack's Grandfather and Father are both inventors.  His Dad has a day job and experiments in the evening.  Jack wants to be a detective.  When he hears bicycles are being stolen, he gets his team together.  It was just going to be him and Teddy but his little sister demands to be included.  She's really smart and has a scientific mind, so he lets her in.  Then the girl across the street that he has a crush on joins too.  Now he has a good sized team.

BooksGoSocial and Net Galley let me read this book for review (thank you).  It has been published and  you can grab a copy now.

They begin their surveillance and it features his cousin who is a bully at school.  He's a good suspect but it's not him.  Then he wants to join their team.  Jack says OK but that leads to his cousin inviting his neighbor girl to the upcoming dance.  Jack was trying to get brave enough to ask her but he hadn't made it yet.  Then he runs into a schoolmate from the past who says she's always had a crush on him, so he invites her so he can watch the other two.

He's going to give up detecting because he failed but his Granddad gives him another case and he solves it so he keep detecting.  He sets up a sting using his cousin's father's expensive bike as bait.  They bite.  They follow them and they find a major operation going on.  Can kids take it down?

This is a good story for young adult readers.  It's exciting, there is danger, and it takes brains to survive.  Give it a try.