Land of Wolves by Craig Johnson 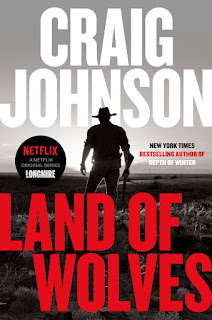 Longmire is back on the job despite his vicious encounter in Mexico.  He has a limp and still has pain but working is better than just sitting around.  He's asked to help find a shepherd that's in high country and hasn't checked in like normal.  He's also alerted to a custody battle over a little boy.

Viking and Edelweiss let me read this book for review (thank you).  It will be published September 17th.

I've rad most of this series so I'm always Glad to see new one out.  Walt Longmire is a good sheriff who can make quick and hard decisions when he needs to.

He finds the missing shepherd hanging from a tree.  He also found a big wolf up there.  It had sampled the dead man's feet.  The local environmental forces are examining a dead sheep, taking DNA from it to see if the wolf killed it.  The news picks it up as a wolf kill and everyone wants to take out the predator.

It turns out the shepherd didn't kill himself, it was murder.But he didn't know many people.  Who could have done it?

As Longmire tries to figure it out, he comes down with some health problems from his previous attack.

The murder is tied to a family secret and it's ugly.  Justice prevails but not in traditional ways.

This was another good read.  Mr. Johnson has never disappointed me.