A House of Ghosts: A Gripping Murder Mystery Set in a Haunted House by W. C. Ryan 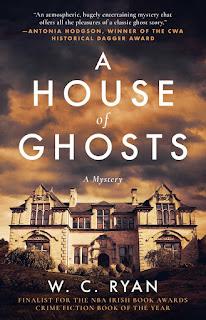 Two intelligence officers are sent to a spiritual gathering to look for a spy.  The meeting is to be held on an island at Blackwater Abbey.  The owner of the abbey is also the owner of a munitions company and someone has been photographing his plans and sharing them with the Germans.  But who would do that?

Arcade and Edelweiss let me read this book for review (thank you).  It will be published October 1st.

They have two seance experts there to help them make contact with the sons they lost in th war.  Donovan is pretending to be injured and is being a gentleman's helper.  Kate is hanging out with her parents.  She can see ghosts and there are plenty at the abbey.

They find everyone there has secrets of some kind.  As they snoop and search for clues, a storm sets in so no one can leave the island.  The first seance was a success.  They got to visit with a dead son.  Since they are stuck on the island they decide to have another.

Before they do there is a murder.  The doctor is knifed to death.  They blame the mentally unstable soldier who staying there, but Donovan knows he didn't do it.  He would have slit his throat, not hit him with so many stab wounds.

Donovan uses the secret pathways in the abbey to find the killer.  He finds where someone has been sleeping.  From there he can clearly hear the conversation on the floor above and he realizes who the spy must be.

There's a dramatic ending that will make you read faster and hope the right people are dying.  The last seance blows up and goes out of control.  More ghosts appear.  It soon all comes to a head and you'll be relieved to set the book down  There's a lot of suspense in the final scenes.