A Single Thread by Tracy Chevalier 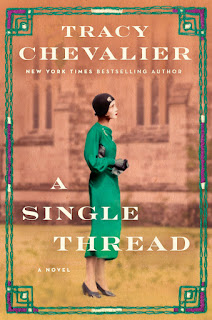 She's lost her brother and her fiancé in the war.  Now she's a surplus woman.  So many men have died there are more women than men.  She and her mother don't get along so she moves out and gets her own room.  It has to be cheap and she doesn't get much to eat, but she can shut her door and be alone and that counts for something.

Viking and Edelweiss allowed me to read this book for review (thank you).  It will be published September 17th.

She works at an insurance office typing.  Her wages are low but the peace and quiet is worth it.  Violet is drawn into a society of broderers—women who embroider kneelers for the Cathedral.  She starts out as a learner and then teaches others the stitches as they arrive to join their efforts.

She finds herself drawn to one of the bellringers.  He's married, he's older than her, and his wife is suffering the loss of their son and has given up on life.  He's not available but she wishes he was.

She continues her independent life, makes some friends, finds someone to stay with her mother, and eventually finds a moment alone with Arthur.  They agree they can't see each other anymore.

Then she develops another challenge.  She's an unwed mother.  That means she has to move and she loses her job.  But she's up to the challenge...