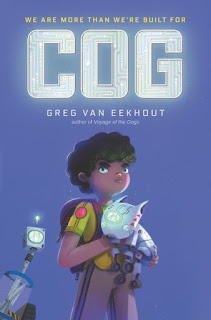 Cog is a robot.  He looks like a boy and he's an advanced robot so, in many ways, he acts like a boy, too.  When he sees a small dog in the middle of the street and a car is coming, he goes to move the dog.  The dog is safe but he's hit.  When he wakes up he's no longer home with Gina and that's when the troubles start.

HarperCollins and Edelweiss allowed me to read this book for review (thank you).  It will be published October 1st.

Cog has something different in his brain and the corporation wants it.  They plan to take his brain out.  He meets his sister, a dog robot, and a trash can robot.  Together they escape and steal a talking car.  The company is after them.  He goes home and Gina isn't there any more.  Now his goal is to get Gina and then escape.

There's lots of action and excitement in this story.  His sister has been taught to fight so she's handy.  When it looks like they will get caught, they switch their brains around and confuse the scientists.  He finds out Gina has a chip in her that forces her to what the company man tells her.

The ending was a good surprise and it was a good read.  Young adults should enjoy the tale.