The Vanishing Museum on the Rue Mistral by M. L. Longworth, Series: A Provençal Mystery (#9) 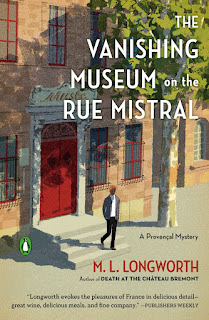 What a shock it was to go to open the museum and find it all had been stolen.  Especially since no one saw anything.  Who could have stolen it and why?

Penguin and Edelweiss let me read this book for review (thank you).It will be published on April 13th.

It was a collection of porcelain dishes for the most part.  There was no jewelry, no money, only old antiques.  They weren't worth much and they would be hard to sell.

While the police are trying to find clues about who would have stolen it, two men go up to the empty museum to talk and look for their own clues.  One is killed outright, the other one is in a coma.  That gives the police another case to work on.

It's slow going but one of them thinks he's figured it out.  The only problem is the killer gets home before he has left the apartment.  Will he manage to stay alive?