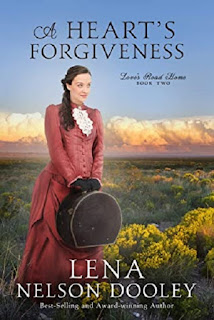 Madeline's guardian has died.  She's on her own and waiting for the will to be read.  As she waits, she takes in a widowed woman who is pregnant.  She's helping her get better but having the baby is too much.  She asks Madeline to take care of her baby and dies. The man who worked with her guardian says he's a full partner and he's going to marry her.  He tells her to get rid of the baby.  Telling him she won't marry him makes no difference.

Wild Heart Books let me read this book for review (thank you).  It will be published April 6th.

She finds an ad for a mail order bride and she, the baby, and the couple she has working for her all leave to go to Golden, NM, to find the man who sent the proposal.  That will save her from a marriage she didn't want.

The man who gives them a ride to town is not happy she's here.  He was going to head off the bride to be but that backfired.  They stay in the hotel and Madeline and the baby go to visit the man who wrote to them.  Philip and the baby become friends right away.  It doesn't take long before she loves him, too.  He's old enough to be her grandfather so she's not sure about marriage.  The man who takes of him doesn't like her.  He thinks she's after Philip's money.

Then the man she ran from finds her.  Luckily the sheriff presses charges against him and he's in jail.

There is a good focus on God in this story.

It takes a lot of work but everything turns out well.  And Madeline does get married but not to Philip...