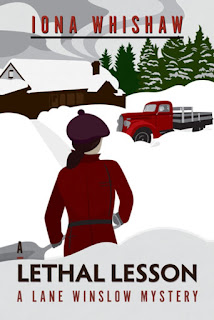 This is an interesting read.  There are missing school teachers, a man who was a hit and run victim, and the police are trying to make sense out of it.

Touchwood editions and Edelweiss allowed me to read this book for review (thank you).  It will be published on April 27th.

A woman named Wendy was living with her father's brother's family.  When they tried to marry her to a elder man, she runs and changes her name.  They said they would come after her...

Rose is being harassed by a man who is drunk almost all the time.  She teaches his son.  When he tries to rape her, she defends herself with a knife.  Then she gets ready to leave the school and go home for safety.

The dead man is the one bothering her.  His son moves in with another family that welcomes him.  His mother is long gone.

Now, mix this altogether and you have a complex case.  The obnoxious man had a fight with his fellow ferryman and he's suspected of murdering him.  Rose is found unconscious at home and rushed to the hospital.  Wendy is taken captive and locked in the basement so her real father can run for office.  His wife does that.  And soon the cop's wife is teaching school.