The Elephant of Belfast by S. Kirk Walsh 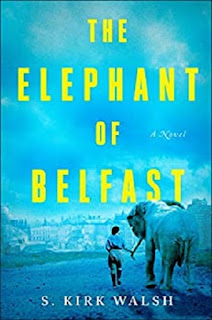 Hettie's goal is to become the first woman zookeeper.  They are only working her part-time but when they bring a three year old elephant in, she really wants to be her caretaker.  It's wartime and bombs are dropping.  Her mother wishes she'd take a job where she could earn more, but Hettie doesn't listen.

Counterpoint Press sent me an ARC of this book to read for review (thank you).  It will be pub;ished on April 6th.

Hettie's sister died while she was having a baby.  Her father has gone away with another woman.  Her mother doesn't even get dressed most days.  The only constant in her life is her friend, the elephant.

They survive several bombings.  Hettie is twenty and can't decide which man she likes best.

She gets moved to full-time at the zoo and she loves the animals.  So when they come to kill the ones that are dangerous because the bombing is too close, she's devastated.  She can't stop them, so she steals her elephant.

It's not easy to hide an elephant but she does what she can.  She even gets to stay in a convent complex...

Hettie's Mom goes missing during the bombing.  Is she dead?  Can Hettie save her elephant?

You'll find the answers to these questions as you finish reading the story.  War changes things and not usually for the better.