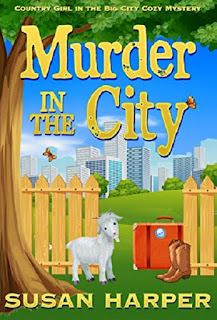 Bonnie is going to the city to go to college.  She's rooming with Katie, her next door neighbor at the farm.  She's a bit scared about living in apartment building, but Katie says they are nice.

Fairfield let me read this book for review (thank you).  It has been published and you can get a copy now.

She's amused to see the dwarf goat in Katie's apartment.  She had wondered what happened to it.  As they bring her boxes up to the room, the door was left open and now the goat has escaped!

They traverse through the apartment house looking for the goat.  One obnoxious man complains about the noise they are making but they are just knocking on doors and talking quietly.  He calls the police.  Then the girls hear the goat.  The silly thing is in the cop car...

They survive this fiasco even if the man is still angry.

Then someone has shoved the mouthy man out his apartment window and he is dead.  The cops question the girls and everyone starts avoiding them.

Bonnie decides to find the murderer so they aren't suspects anymore.  She goes in open doors and windows looking for clues.  The cop that likes her tells her to knock it off.  Then he takes her up to the dead man's apartment to look for clues.  She finds a good one...