Dance with Death: A Barker & Llewelyn Novel by Will Thomas 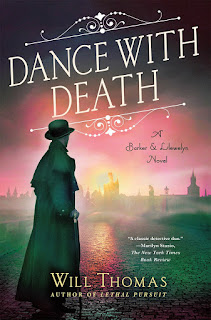 Tsar Nicholas is in England and someone is trying to assassinate him.  Hr has his palace guard and the Russian police as well as the English police trying to keep him safe.

Minotaur Books and Edelweiss allowed me to read this book for review (thank you).  It will be published April 13th.

Nicholas has brought his lover with him.  His mother is trying to find him a bride in the royalty but he's not enthused.  Most of them are older than he is.

One of his relatives is visiting at the same time and they look alike.  A man tries to kill the relative but is stopped by the English detective.  Then the assassin's head is blown off.  There was another killer waiting for him.

The assassin takes shots at Llewelyn and his wife but it's to warn them off.

The Tsar is not safe.  His own relatives want him dead so they can take his place.  He's young and does things he shouldn't, like go on walks.