The Nature of Fragile Things by Susan Meissner 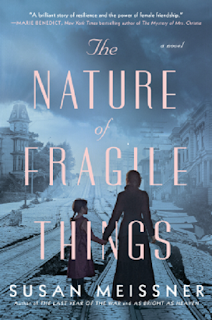 Sophie is an Irish immigrant in New York that desperately wants to find a way out.  She's living in a tenement, sharing quarters and not really getting enough to eat.  She's working but she doesn't earn much.  So when she sees an ad in the paper from a man looking for a wife, she answers it.

Berkley and Net Galley let me read this book for review (thank you).  It will be published February 2nd.

Sophie travels cross country and meets the man she's to marry.  They get married immediately and he takes her to a new home he's purchased.  She meets his little daughter and falls in love with her.

This is a tale of secrets.  The man lies to her, is guilty of bigamy, and the mother of the little girl is not dead as he says.  Sophie has some secrets of her own.

She meets another wife who is pregnant.  They are both shocked that the same man has married them but with different names.  He comes home while she's still there and rushes up the steps where his pregnant wife is standing with his daughter.  The daughter shoves him and he falls back down the stairs.  Sophie drags him out in the kitchen so the child won't see what she's done.  He's not looking good and Sophie wouldn't care if he died.

Then a big earthquake hits.  The women leave the house and go to a park where they are gathering folks.  The pregnant woman has her baby early and she's taken somewhere else.  Sophie and the girl keep looking for her.  They get reunited and then they find the house is just ashes.  They go to the other lady's house to live.

Sophie goes back and looks for bones but she's not sure he if he died or got away...

Will he come back?