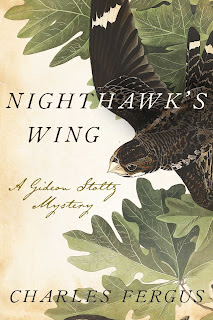 Gideon meets a young beautiful woman that is staying with friends and likes her.  When she is found dead later, he's on the trail of the killer.

Arcade Crimewise and Edelweiss let me read this book for review (thank you).   It will be published February 2nd.

He follows up with everyone that knew her.  No one knows anything about her last days.  He goes out of town to find one fellow looking for her.  He finds that he had raped her and then the man attacks him.  He fights back and ends up breaking the man's leg.  He's warned by a young boy to get out of town because his brothers would be out for revenge.

Gideon wonders what happened in the blank area in his mind.  He was drinking and fell off his horse, hit his head and blacked out.  He wonders if he killed her.  His wife is still mourning the baby they lost and doesn't want much to do with him.  He keeps searching his mind for facts.

Then another woman comes up dead.  It looks like she hung herself but he doesn't believe that.

The killer was no one I suspected.  Gideon almost dies after he found out who the killer was but his wife saved him.

With herbal remedies and poisons this was an interesting read.  I was hoping Gideon would survive.  He did.  No one in this story is without sin except the first woman.  Watch for the undercurrents in the story.