To Marry and to Meddle by Martha Waters 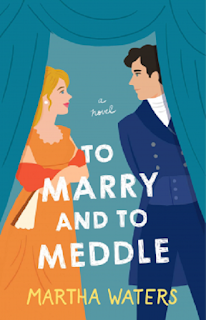 Emily should have been married by now, but her father's gambling debts are too big to be ignored.  Her mother orders her around.  She's dating the man that holds her father's debt but she doesn't like him.  Then she meets Julian.

Atria and Net Galley gave me the opportunity to read this book for review (thank you).  It will be published April 5th.

Julian owns a theater and his father told him he had to sell it.  He said no and he was sent out of the house with his father saying he was no longer his son.

As they settle into married life, Julian finds he has married a virgin.  That causes him some worry but it all works out.  Emily starts becoming her own person.  She finds Julian defending her.

She wants to go the theater but he doesn't want to ruin her reputation.  She finally talks him into it and she gives him ideas for the show.  She also invites his father to come and watch.

The last part of the book is the best, so don't give up on it...

Email ThisBlogThis!Share to TwitterShare to FacebookShare to Pinterest
Labels: Book Faerie, book review, Martha Waters, To Marry and to Meddle

Magic: Once Upon a Faraway Land by Mirelle Ortega

Magic can be good or bad depending on the circumstances. Harry M Abrams sent me a copy of this book to read for review (thank you).  It has ...