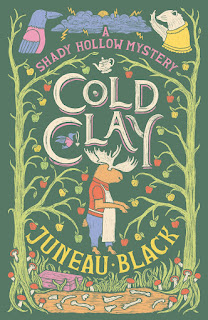 Shady Hollow is a small community where everyone knows everyone else.  It's an animal community.  Everything is fine until one day a rabbit finds some buried bones...
Vintage Crime/Black Lizard and Edelweiss let me read this book for review (thank you).  It has been published so you can get a copy now.
Vera is a vixen who is also a reporter.  She finds out about the bones and it's a moose.  Joe who has a cafe in town had his wife walk out on him.  The police put him in jail because the think he killed her all those years ago.  Vera knows Joe would do no such thing so she starts trying to unravel the past.  Her boyfriend is the deputy sheriff and he tells her to stay out of it.  She doesn't give up.
She eventually figures it out.  She has to be careful though.  The first murder case she solved she almost died.  So she goes to meet the murderer.  The murderer tells her she put sleeping pills in her drink.  That's true but Vera has switched cups.
Will Vera survive this danger?
at March 12, 2022

I would have loved having this book as a child.  It's a board book of six pages and has over a hundred reusable decals. You can make you... 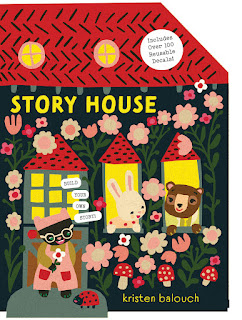