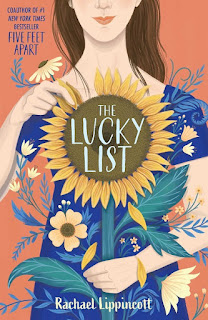 Emily and her mom were always lucky.  But when her mom got cancer, her luck ran out...

Simon Schuster Books for Young Readers sent me an ARC to read for review (thank you).   The book is being published today.

Emily and her boyfriend have broken up again.  She feels left out of the friendships she shared with him and he tells her she has to get out of the box she's living in.

She's trying to clean out her mother's closet when she finds a box she hasn't seen before.  She finds a bucket list in there that her mother wrote out and did when she was a teenager.  Emily decides she's going to follow the list too.

It's hard for her because she's not the most brave person, but she does it.  She thinks she's going to change and her boyfriend will like her better.  But there is another complication.  She really likes a new girl she met and she finds herself more interested in her than her boyfriend.

As Emily begins to talk more and tries to make sense of her feelings, she learns a lot about herself.  She makes up her mind to be happy, but it will take some work.