Much Ado about Nauticaling by Gabby Allan, Series: A Whit and Whiskers Mystery (#1) 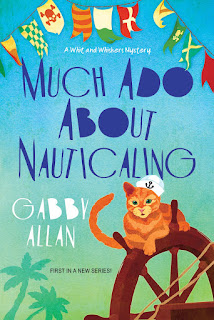 While they are giving a tour in their glass bottom boat, they get a surprise when they go dock.  A body floats across the glass bottom...

Kensington and Edelweiss let me read this book for review (thank you).  It will be published July 27th.

There are lots of suspects.  He was married and Whitney thinks his wife may have been the killer.  But the police take her brother in.  The chief wants to end the case quickly and he thinks Nick makes a good suspect.

Whitney is trying to help her brother and she has several suspects, almost all women.  She asks lots of questions and tries to follow the path of the killer.

She finally gets her brother to stop hiding and turn himself in.

Then she realizes that she knows who did it.  There was another murder and it gave her the final clue in the case.  Unfortunately, she sent that woman off with her brother.  He was going to fly her off the island.

Will she get there in time to save her brother?