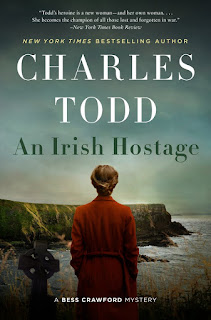 England and Ireland are still fighting.  Bess  is done nursing for a bit and is visiting to be in a wedding.  Soon she finds herself wondering how it's going to work out.

William Morrow and Edelweiss let me read this book for review (thank you).  It will be published on July 6th.

It doesn't take long until the friends she has there go missing.  The groom has been taken from the house he was staying at.  No one can find him.  Despite that, his fiance has the wedding anyway hoping against hope that he might show up.  He does and manages to get married before he collapses.  He's badly wounded and Bess soon takes over his care.

Even Bess gets hauled away to jail but someone else is accused as the murderer and she's allowed to go free.

Then the English Major disappears.  It takes a lot of work to find him and he's in bad shape too.  Bess nurses him and then they decide to leave for England.  But there are two men with guns after them.  With two sick men, two women and two men, will they be able to get away?