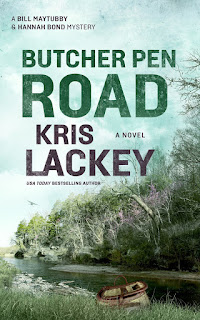 A deaf boy finds a dead body.  His mother calls the police and it takes them a bit to identify him.

Blackstone Publishing and Edelweiss let me read this book for review (thank you).  It will be published July 13th.

Maytubby and Bond work the case together.  There are other police jurisdictions involved, too.

This turns into a complicated case.

The boy was selling hides to a guy who sold them for booze.  They find a foot doctor who is perpetrating fraud.  They learn about a bunch more men involved in the doctor's scheme.

Then one of the men is going after the boy who found the body.  They have to try to protect him and his mother as well as bring in the bad guys.

Not everything goes as planned and it gets to be quite a dangerous quest. Will the cops win or the bad guys?