The Fabled Stables: Trouble with Tattle-Tails by Jonathan Auxier 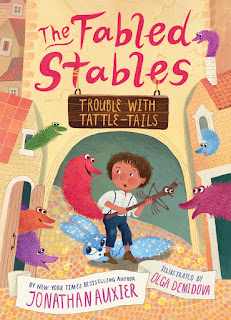 Here is another fun read!  Auggie takes care of the creatures in the Fabled Stables.  He has one that is new that he can't converse with.  While he's trying to determine what to do next, there's a loud boom!  The stable has added another space for a new animal.

Amulet Books sent me a copy of this book to read for review (thank you).  It has been published and you can get a copy now.

When he and his friends go into town, it's almost deserted.  He calls out and the mayor steps out of the alley.  She has a tail!  And it tattles on her.  Soon he finds everyone in town has one.  While he's looking and trying to figure out how to get rid of them, he suddenly has a tail too!

Eventually he gets it down to one tail and he takes to the stable.  It doesn't want to be bored, so he introduces it to the creature who won't speak.  There's no lack of conversation anymore...