The Secret French Recipes of Sophie Valroux by Samantha Vérant 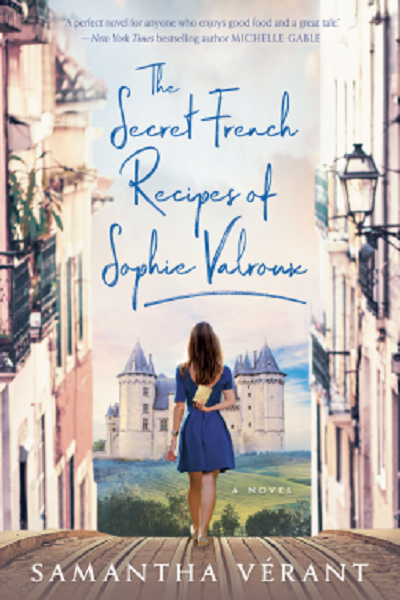 Sophie is really close to making her dream come true.  They only need one more star to be ranked high on the Michelin scale.  She's cooking part of the meal and another cook comes over to taste her soup.  He tells her it needs more spices so she adds them.  Then they find out not only did they not earn another star, they lost one they had!  Then the cook who had her add spices tells the boss it's her fault.  The boss tastes her soup, spits it out, and fires her.  It was a set up to get rid of her...

Berkley and Net Galley let me read this book for review (thank you).  It is being published today.

Sophie decides to go home and see her grandmother again.  It's been years between visits.  She finds out her mother told her grandmother she didn't want anything to do with her.  Not true...

Her grandmother is in the hospital so she visits as she can and takes over her grandmother's cooking duties.  At first it's like she lost the ability to cook but it comes back.  This is where she learned to cook.

One of the sisters working there hates her.  The other one loves her.  The boy she grew up with won't speak to her.  She has a lot to get straight before things settle down.  Her mother did a lot of damage before she committed suicide.

She gets her grandmother home, finds out she's inheriting the house and the restaurants, and then she gets invited back to her old job.  What will she do?  Stay in France or go back to New York?

This starts off slow and sad but as she pieces her life back together the sadness leaves.  Despite the odds, she manages to live happily ever after.