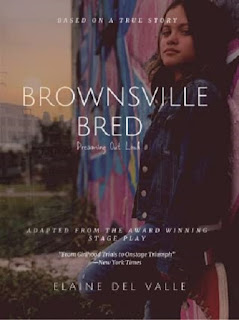 This is based on a true story.  This woman lived a tough life.  She grew up in a bad part of town and her family ends up splitting up because her father was doing drugs...

The author sent me a copy of her book to read and review (thank you).  It is out now and you can buy your own copy.

Because she's from Puerto Rico, her parents ended up in not the nicest neighborhood.  Things are very expensive in Brooklyn.

This is the story of her childhood.  There are a lot of predators out there.  She usually isn't allowed out oon her own but when she's sent out on an errand, a man grabs her and heads for the alley.  She knows what he wants and she doesn't intend to let him have it.  She fights back, he leaves.  But later she's tackled by more than one man.  They hit and kick her and then walk away.

When she gets home, her mother is upset and sends her to Puerto Rica to spend the summer with her dad and his mother.  Her grandmother doesn't like her so it's no easy visit.

Back home she gets a phone call from her father.  He's dying from AIDs.  Seems his needle wasn't as clean as it should be when he used it.  He hasn't done drugs since he left but it doesn't matter.  She refuses to go to his funeral.

Despite all these hardships, she goes on to first write a play about her life and then on to write this book.  She lived a hard life but she bloomed as she got older.