Willa and the Whale by Chad Morris, Shelly Brown 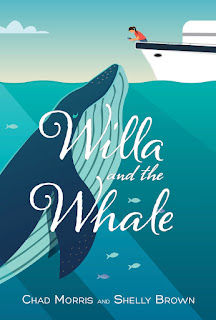 When Willa's parents divorce, she has to pick the parent she will live with.  She chooses her mother, a marine biologist.  Mom gets a job in Japan and off they go.  She learns a lot about the ocean from her Mom.  Then Mom's heart gives out and she's sent back to her Dad.  By this time, he's remarried and he has a ready made family.  She's got more siblings than she knows what to do with!

Shadow Mountain Publishing and Edelweiss allowed me to read this book for review (thank you).  It will be published March 3rd.

She's deeply grieving her mother and there's too much noise to even think, so she walks by the ocean and looks in the tide pools, remembering what her mother had taught her.

Her Dad takes her on a whale watch cruise and while everyone is over on one side watching the sea animals, she goes over to the other and sees a whale jumping.  She starts to talk to it, and it talks back!  Soon they arrange to see each other again at the beach she goes to.  They won't be close but they can talk.  She calls the whale Meg and even works her way up to telling her about her mother's death.

Then there's a big storm and she finds a huge beached whale.  He's a blue whale and while she tries to save him, he's dead.  The small town doesn't know how to dispose of him, so she begins working on a plan with her family.  She even does the council presentation on her own.

It's hard with two deaths in a row, but Meg helps her grieve as does her father and she begins to heal.  She's even made friends again with the boy she was best friends with when she left for Japan.  He's has sadness in his family, too, but he's rallying.  They can work on healing together...