Hid from Our Eyes : A Clare Fergusson/Russ Van Alstyne Mystery by Julia Spencer-Fleming 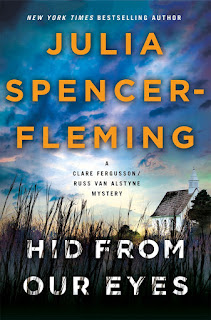 A woman in a party dress is found in the middle of the road.  She's dead.  She's not wearing any shoes and has no purse.  There's no sign of what killed her.  The case was never closed.

Minotaur Books and Edelweiss allowed me to read this book for review (thank you).  It will be published April 7th.

In 1972, twenty years later, there's another young woman left in the same way.  One of the suspects was a young man back from Vietnam but this case was also left open.

Russ is the current police chief .  He's called out on another case the same as the last two.  He wants to solve the case and do it before they pass legislation to go with the sheriff's department and shut down their own police department. It gets worse when they realize that he was the suspect in 1972...

They have brought in another war veteran as a suspect but he doesn't believe he did it.

They search for any clues and find none.  The state police are no help.  But the medical examiner says he can't see why she died but he's sent for a full toxicology report and it will be slow to come.

When they get the report, they begin a new search and find an old storage building.  They get a warrant and head out there.  That's where they find their shoes and purses.  More than one family member was involved.

The murderer is unexpected and the deaths were needless.  It causes so much turmoil, Russ resigns from his job as chief.

The next book will let us know how it all worked out for Russ and his family.