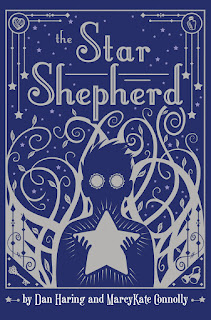 His father is a Star Shepherd.  He uses special goggles to watch for falling stars.  On this world, the stars came from the ancient elders hearts and it held the dark monsters back.  There were stories of giant mechanical men who hung them in the sky but Kyro and his father never saw one.  What they do is retrieve the fallen stars, put them in a new casing and then catapulting them back to their spot in the sky.  But now someone or something is stealing them before they can get there.  What's worse is whole constellations are falling.  They are being cut out of the sky.  Who could be doing that?

Sourcebooks Young Readers and Edelweiss allowed me to read this book for review (thank you).  It will be published September 10th.

His father goes to the Council for help.  They think he's seeings things again and refuse to respond.  So his father heads out by himself leaving Kyro to watch the stars.   He was only supposed to be gone a few days but he doesn't return.  Then he gets a summon from the council for his father.  He goes in his place and finds no one believes him and they call his father a traitor and terminate him.  He has no money for passage on the way home so he and his dog hide in a shipping container.  When his dog makes a noise, he's discovered and is taken to the captain as a stowaway.

There's a lot of excitement in this story.  What will the captain do to him?  Will he find his father?  Can he survive attacks by the dark things?  Can he stop the stars from falling?  Keep reading and you will find out.

I enjoyed this young adult fantasy read and think you will too.  Give it a try.