The Chestnut Man by Soren Sveistrup 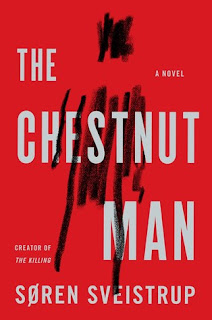 She's assigned to a murder case and is told to team with the new man.  He's an experienced cop but he's been sent to their department as punishment.  She doesn't like him much but she's got to work with him.  The murders are horrors.  The bodies are missing hands, some missing legs, and there is a little chestnut man at each murder site.

Harper sent me an ARC of this book to read for review (thank you).  It will be published September 3rd.

The killings have been going on for years as they look back at records.  The two cops often go off on their own hunts for info but when they compare, they get closer to the killer.

This tale is intense.  I found myself setting it down for a bit and doing something else.  Of course, I was back reading again after five minutes.  It's intriguing even if the crimes are horrifying.  The details are given with a bald forensic analysis that makes your skin crawl.  It's hard to believe there are people in the world that are so mean.

The worst part is the killer is someone close to them...

Can you figure it out before the end?

Will need to be in the right mood for this one! Cheers