The Lady Rogue by Jenn Bennett 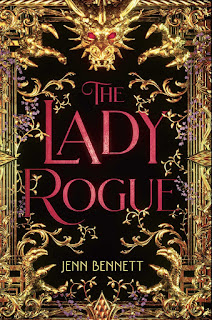 Theodora has been traveling with her treasure-hunting father for years but he always leaves her in the hotel if he thinks there's any danger.  It's disappointing to get so close and get left behind.  He takes Huck with him, the boy he's taken in and raised.  Then one day Huck disappears.  He and Theodora were caught in a flagrant act.  Theodora thinks he left without a goodbye and she's heartbroken.

Simon Pulse and Edelweiss gave me the opportunity to read this book for review (thank you).  It will be published September 3rd.

On this trip, she runs into Huck again.  He tells her that her father went off on his own and never returned.  Huck came to the hotel looking for him.  They decide to go to the next meeting point to see if he's there.  He's not, so Theodora starts reading his journal, looking for clues.She finds out it's got ciphers in it and she has to determine which kind it is to read it.  Once she does she starts following her father's trail.  He's after the true ring of Vlad, the Impaler, also known as Dracula.

There's lots of excitement, action, and confrontations with another organization that's also after the ring.  Theodora is smart and she puts things together that her father doesn't.  This has a very surprising ending.  It kept me glued to my seat reading.  I think it'll do the same to you if you enjoy fantasy and intrigue.