The Last Train to London by Meg Waite Clayton 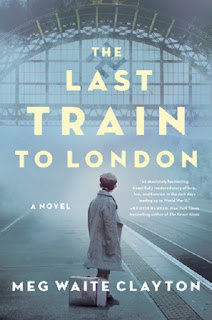 When the soldiers began gathering up all the Jews in Germany, several brave souls risked their lives to smuggle out the children.  They began with orphans but soon parents were sending their children away to keep them safe.  Most parents didn't survive.  This is a fictional look at an ugly part of history.

Harper sent me an ARC of this book to read for review (thank you).  It will be published September 10th.

I admired the bravery of one lady.  She got in deadly danger but managed to be released because she was not a Jew.  She's unable to carry a child to full term, so she's determined to save all she can.

The young man in the story sneaks out the window and runs across roofs to escape the Gestapo.  He manages to stay safe by hiding beneath the candy shop his father used to own.  He takes his little brother down to catch the train but he intends to come back to take care of his sick mother.  The girl he likes gets him on the train, too.  His mother's neighbors will help her.

Imagine moving 600 children at one time!  They crossed a few borders to get on the fairy and their paperwork had to be shown.  When the girl accepted a picnic basket from a woman, she thought it was sandwiches for them.  When she gets on board, she finds it is a baby.  She has to keep her hid. Their adventures are many and it's no easy trip but they manage to make it.

This is an intense read but it sounds very authentic.  This was an awful time in our history and I hope nothing like it happens again.