The Dreaded Groak by Peta Lemon 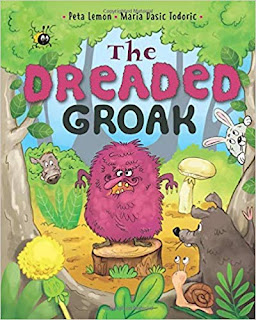 Hazel the rat (who is a boy) has been told by his mother that he needs to find his own place.  He's old enough to be a man now.  Hazel doesn't think so and doesn't want to leave but his mother help him pack and sends him off with these words of advice:  Beware of the dreaded Groak.

The author sent me a copy of her ebook to read for review (thank you).  It has been published and you can grab a copy now.

Hazel fearfully rushes to his brother's house and knocks on the door.  His brother hides.  He doesn't want him living with him.  Then he runs into the bully of small animals and he steals his pack which had all his food.  Then it begins to rain...

He builds himself a little shelter with fallen twigs and leaves and that works for a while.  But the rain doesn't let up and it washes his shelter away.  He takes shelter under a big leaf.  Then he realizes he's not alone.  The dreaded Groak is there, too.  Will he eat him?

Then he notices the Groak looks sad.  They talk and he finds out the Groak is nice.  Before the rain stops they are friends.  They even become roommates.  Just because someone said he was mean didn't make it true.  He was different looking but that didn't mean you had to afraid of him.

Learn from their personality and actions, don't assume.

The illustrations are great and this is a good story for beginning readers.  I really enjoyed reading it and it has a good message.