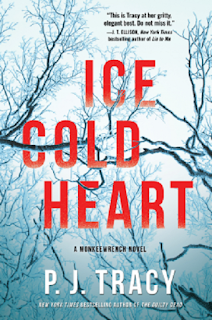 They haven't had a murder for months because the weather is so cold.  But that changes when someone's wife goes missing and she's found in her friends house dead.

Crooked Lane Books and Net Galley allowed me to read this book for review (thank you.  It will be published September 10th.

This killer is sadistic and enjoys watching his victims die.  They look for clues but find none.  Then the physic that warned them of the murder ends up dead and some of the same tape was used on her.  They know they are looking for a monster, they just don't realize how long he's been active...

They find an art show that depicts women in sadistic positions so they ask to speak to the artist.  They are told he's sickly and doesn't take calls or visitors.  They also check out a club that that lets people meet who have deviant sexual interests.  The first dead woman was into bondage and they think she met her killer there.

Then one of the Monkeewrench Gang saves a lady from dying on a park bench in the cold and finds she's part of a group looking into war criminals.  She thinks the killer may be a man from her past who ran a prison in the war in Yugoslavia.  He did things like that there.

It's hard to find a man who knows how to hide.  With the help of the Monkeewrench Gang, Petra who was his victim long ago and two cop teams they manage.  But will they be in time to save his new victims?

The action and tension in the story never let up.  Don't start it late in the day, you'll be up all night...
Posted by Journey of a Bookseller at 8:00 AM