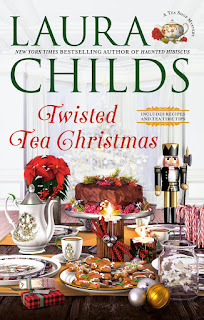 Theodosia is getting ready for Christmas tea parties when she finds a woman she liked dead on the floor in her building.  She's upset because she was a sweet older lady.  The person who killed took her diamond rings she was wearing.

Berkley and Edelweiss let me read this book for review (thank you).  It will be published October 5th.

Theo calls the police but she also starts snooping herself.  Being warned off the case doesn't slow her down.  There are a lot of suspects.  She questions most of them and learns a few things.  But she's still not sure who the killer is.  She knows they stole a painting so she goes to talk to an art dealer.  Unfortunately, he's dead, too.  She sees his hand poking up from the homemade grave.

She investigates everyone.  But she has no idea who the killer is until it's almost too late for her.  It's good thing she was fostering dogs...