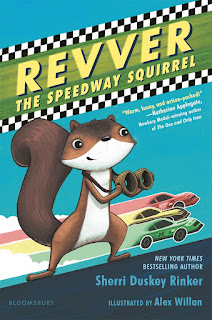 Revver is part of a pit crew in the racing world.  He can see things the men don't and he can get in small spaces to fix things.  The crew loves him.  But the boss gets mad at his messes and he threatens to throw him off the squad.

Macmillan and Edelweiss let me read this book for review (thank you).  It will be published October 6th.

Revver has a big problem with being patient.  They are going to fly to the next event and he'll go with them instead of with the driver.  Bad weather delays their flight.  He hates sitting in the crate and a spoiled cat lets him out.

Revver has many adventures at the airport but when he finds he's too late for the flight he's devastated.  It's a good thing the birds help him.

Will he ever find his humans?  It's pretty scary but eventually he does...