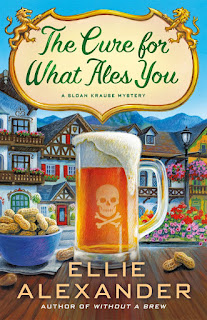 Sloan is happy with her life.  She partners in a brewery, has relatives she loves, and she's developing feelings for her partner.

Minotaur Books and Edelweiss allowed me to read this book for review (thank you).  It will be published on October 5th.

Someone has been stealing things out of hotel rooms.  They decide it must be an employee who is doing it.  Then they find a dead housekeeper in a room.  That's even more serious.

Sloan starts looking for the killer but she has more than that to worry about.  Her father has been released from jail and she's been warned that he is coming to kill her.  He already killed her mother.

There are all kinds of clues from various people.  Who can Sloan trust?

It's a busy story that moves along with secrets coming out on all sides.  The setting is in Leavenworth, which is a beautiful Bavarian town in Washington.

I wasn't sure if Sloan was going to make it.  You'll have to read to see.