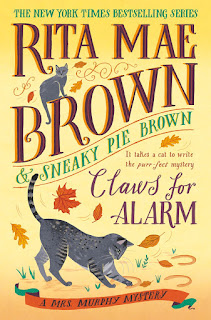 There is a family that has been living in the same place for years.  They have a library of history.  When the current resident dies, she leaves behind two children - they don't get along.
Bantam and Edelweiss let me read this book for review (thank you).  It will be published October 12th.
The mother was a popular person with lots of friends.  The children hated each other.  The oldest, a woman, felt her brother already got his share of the inheritance because he went through drug rehab.
When the will was read, all they had to share was debt!  The brother wants to sell the old papers but his sister doesn't.
Then two more people die.  They were murdered.  Who is the killer?
The animals in the book are the most fun.  While the humans are fighting and killing, the animals start looking for clues.
at September 27, 2021