The Sun Down Motel by Simone St. James 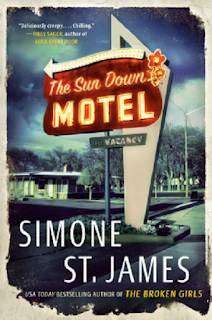 Carly knows very little about her aunt.  She disappeared thirty-five years ago.  Is she dead or is she hiding?  She decides to go to the town and see what she can find out.  She even signs on as a night clerk at the same motel...

Berkley and Net Galley gave me the opportunity to read this book for review (thank you).  It's being published today.

What Carly finds is that several women were killed in this small town.  Different years, just dead bodies to be found and no relationship between the women.  There was one witness who said she saw a salesman go up to the house but she never saw him leave.  Her aunt Viv (years ago) starts watching the salesman that use the motel.

Carly also finds that the motel is haunted.  She sees Betty, another dead woman dumped on the construction site before the motel was built.  She also sees a young boy that died in the swimming pool.  And she can smell the cigarette smoke of a previous night clerk that died from a heart attack.  He eventually shows himself to her, too.  They try to warn her of danger, but she doesn't understand.

With ghosts and killers from the past and in the present, it makes you wonder who is going to win.  It's a suspenseful read, with Viv and Carly sharing chapters.  Pay attention to which one you're reading about or you'll get confused.

The ending was something else.  I'm just glad Carly found herself a boyfriend.