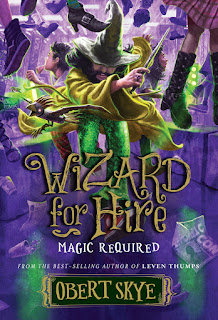 When Ozzy's parents are kidnapped, he advertises for a wizard to get them back.  The Wizard he gets, Rin, is sort of hit or miss but he's the applicant.  Ozzy has a special power his parents gave him but it's not very useful.  But Ray, a nasty man, wants to capture Ozzy and steal his blood so he can have those strange powers.  He wants to rule the world!

Shadow Mountain and Edelweiss gave me the opportunity to read this book for review (thank you).  It will be published on April 7th.

Ozzy is friends with Sigi, Rin's daughter.  They are on the run from Ray.  His thugs show up everywhere.  Ozzy has a mechanical raven that warns him and defends him from trouble.

There's danger everywhere.  The police are trying to protect Ozzy but that's hard to do when he sneaks off.

Ozzy finds out his father is dead but his mother is still missing.  He loses his bird to the thugs that work for Ray.  Rin saves him from Ray but Ray isn't giving up.  They meet in a public place and then Rin does a big magic trick.  Even Ray is caught unaware.

Ozzy finds out where his mother is.  He also finds out he has magic!  Things don't end so well for Ray...