One Minute Out by Mark Greaney 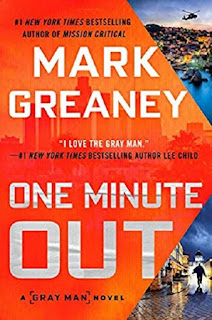 He's on a mission in Croatia but he never expected to find a human trafficking site.  They steal or talk young women into leaving their homes for a better life, but it's a lie.  They get turned into sex slaves...

Berkley sent me a copy of this book to read for review (thank you).  It will be published February 18th.

Gentry wants to help them but his handlers aren't interested.  Then he finds out that director of the sex trafficking scheme is useful to them and when he insists on helping the women, he's told not to kill the director.  He doesn't like that but he agrees.

Since the agency won't help, he visits a gangster and gets the name of gunman who will.  Gentry is an assassin and these men are killers.  He gathers them together and they start retrieving the girls.  They all have guards, so there's plenty of killing.

This story reminded me of James Bond.  No matter the odds, they keep going.They end up losing some men but they don't stop.

There's a young woman helping Gentry.  Her sister is missing and she's sure that these men have her.  He tries to keep her out of the action but it doesn't take long for the other side to decide her sister is a bargaining chip.  Now they have to be very careful if they want to get her back alive...

This is an action packed tension driven story.  He could die at any time but he doesn't.  I especially liked the ending.  The director is going to wish he never took him on.